HOW I BECAME A WRITER: A TRUE STORY 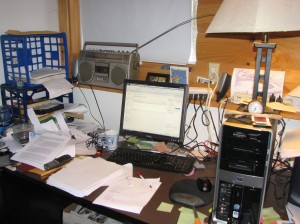 In the spring of 1985 I was twenty-seven years old, four years out of college with a degree in Creative Writing and working at the Boston Public Library, mostly moving books. A few months earlier, an attempt to go to grad school for a Master’s degree had fallen apart. The school I really wanted to attend rejected me and another, although I was accepted, would not offer any financial aid. Already saddled with $10,000 in student loan debt, I withdrew.


I was working at the library because that was where the books were, and because there were also some people there who liked books and writing, which was important to me. I was involved in the local poetry scene, held a weekly beerfest and poetry salon in my apartment, but at age twenty-seven I had essentially published nothing.

I was, however, doing quite a bit of reading, and one day I read a few paragraphs about the suicide of Boston Red Sox manager Chick Stahl in the spring of 1907. One sentence stood out. It claimed he had killed himself because of “the pressures of managing.”

Even though I wasn’t a Red Sox fan my bullshit detector went off. If the pressure of managing the Red Sox had killed Chick Stahl then why hadn’t Darrell Johnson or Don Zimmer done the same? There should have been a whole graveyard full of former Boston managers.

I was intrigued and wanted to find out why he really killed himself, so I started poking around. Books on baseball history told me very little beyond the fact that most books on baseball history were pretty bad, so I went to the newspapers. The library has an amazing collection of Massachusetts newspapers on microfilm and I started in on one of the eight or nine Boston dailies that existed at the time, using my lunch hour and break times to scroll through film.

Over a few weeks I began to figure out what happened, printing out page after page and taking notes to keep track of what I was learning. I kept going in deeper and deeper. When I told my girlfriend what I was learning and she didn’t fall asleep I began to realize that other people, even strangers, might also be interested. I started to think about turning it into a story.

Unfortunately, I didn’t have a clue about how to sell it, much less write it. I had been editor of my high school newspaper and won a number of state and local awards at the time, but apart from writing academic papers in college, I had had only written poetry and had abandoned prose entirely.

So what to do? Well, I was working in a library, after all. Perhaps there was a book that would tell me what to do.

There was. It was called “How to Be a Freelance Writer” and included a chapter about how to pitch a story to an editor, what information to include in the cover letter, and other practical tips, including sample pitch letters.

Over the course of the next few days I pored over the book and did exactly what it told me to do. I identified two local publications that I thought might be interested in the story, The Boston Globe Sunday Magazine and Boston Magazine, and I found out the name of each editor. Then I formulated a cover letter and a three paragraph pitch that said what the story was, who would be interested in reading it, why I was the only person who could write it, how long it would be and when I could deliver it, meticulously typing out two copies of each on my little portable electric typewriter using the same few fingers I still use today. Then I sent the pitches out by mail and waited.

Three or four days later an envelope arrived with the return address of the Boston Globe. I opened it and discovered a mimeographed letter thanking me for my submission and informing me that the Globe really wasn’t interested.

It wasn’t even signed. I felt stupid and naïve. I was certain that a similar letter from Boston Magazine would soon follow.

Then I got a phone call. I can’t remember precisely who called – I think it was an editorial assistant or secretary - but Boston Magazine editor Ken Hartnett wanted to see me the next day at 11:00 a.m..

My hair hung down to my ass and not only didn’t I have a suit, I didn’t have a tie. I figured a pony tail would take care of the hair but I still needed clothes. A T-ride to the Salvation Army store in Brighton and fifteen dollars solved the problem.

I called in sick to work the next day, drank too much coffee, cleaned up and walked into Editor Ken Hartnett’s office, hair combed and tied back, smelling faintly of mothballs, an aspiring writer.

Hartnett was old school, banty rooster Irish with big bushy eyebrows, a voice that sounded like it had been dipped in an ashtray, his tie loose and his shirtsleeves rolled up, a tough kid from Jersey City who had fallen in love with newspapers and seemed perpetually amused by the fact that now he was editing a fancy magazine. He ignored both the odor of my suit and the length of my hair and told me he loved my pitch, the way I teased the story and framed it, how I identified my audience for the story and all sorts of other good things. He told me it was the kind of story that really worked for a magazine like his because he needed two months lead time for every story, and that made sports stories difficult, but ones like this worked. Then he said “Do you have any clips?”

Now, having read “How To Be a Freelance Writer” I knew he wasn’t talking about grass, but examples of my work. I gulped and told him the truth.

"I don't have any. I haven't written a story before, but I was editor for the paper in high school."

High school. I really said that.

He could have, and probably should have, sent me away. Boston Magazine was a big deal then, one of the first successful city magazines. The economic “Massachusetts Miracle” was beginning to kick in,. The magazine was fat with ads and had just moved into gleaming new office space in a renovated historic building. Most of the bylines were big name writers that even a poet could recognize.

It was not a place for beginners, and that’s all I was, no matter how closely I had read that book.

But he didn’t send me away. He started asking questions and changed my life.

For the next hour we talked about the story - what it was about, how I was researching it, how I planned to write it, and about me - who I read, where I went to school and a thousand other things. I was out there without a net and he undoubtedly knew it, but he was walking me out there anyway, giving me a chance to talk my way into a story, seeing if I’d slip before I did.

Then it was lunchtime. He had to go.

“Here’s what I’m going to do he said. I’ll take the story on spec.”

Blank look from me. Spec? I hadn’t read the book that closely.

“That means I’m asking you to write it and if I like it I’ll pay you three hundred bucks. If I don’t, you don’t get paid. Alright?”

I nodded, then he ushered me to door.

“I need it in two weeks,” he added, shaking my hand. I turned to leave and then he spoke again.

“Wait a minute,” he said, squinting at me over his reading glasses, scrutinizing me one more time. “You can write, can’t you?”

I looked him in the eye and lied. “I don’t think it will be a problem.”

I floated home and got to work. For the next week I woke up every day at 5:00 a.m., went into the library early and did research before it opened, then came home and wrote until I fell asleep. In those pre-computer days that meant I wrote the story out in longhand, over and over and over again, scratching out words, circling paragraphs, drawing arrows, filling the wastebasket with draft after draft trying to write a story I wanted to read. I lost ten pounds - two belt loops - before I did.

I asked my boss at the library if I could come in early and use the IBM Selectric typewriter in the office, the one that made corrections so cleanly they were almost invisible. Given my typing skills, this was not unimportant. He said yes but it still took another two long mornings for me to type it.

When I was done I put the story in a brand new manila envelope and hand delivered it to Hartnett’s office on my lunch break, several days ahead of deadline. The book said that would impress an editor.

The next day I got a call.

“Glenn, Ken Hartnett. I’m buying your story. What do you want to write about next?”

I blurted out something off the top of my head, a subject I knew nothing at all about except for the fact that I had never read anything about it, and that told me there was probably a story there. I was learning fast.

I was a writer.

Glenn Stout is currently acquiring stories for SBNation and\thinks there is a lesson or two in here for aspiring writers.  For more information see the post entitled "Help Wanted"