The Real Gods in Red Stockings 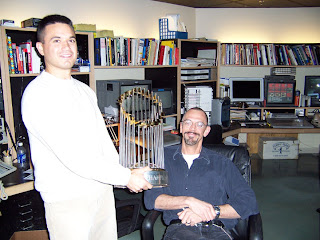 
Catcher: As much as I’d like to vote for Lou Criger, the only Red Sox catcher known to be addicted to morphine, Criger had no nickname, and behind the plate Boston has always gone for nickname guys who as soon as you thought they could hit, stopped. Like Birdie (Tebbetts), Hick (Cady), Rough (Carrigan), and Tek (Vari). You get the idea. Although my heart wants to go with Samuel Charles White, who once owned “Sammy” White’s bowling alley in Allston, I can not ignore Richard Leo Gedman, aka “Geddy” on the ubiquitous Red Sox painter’s caps that everyone wore in the ’80s. And who could forget the futility of that Walt Hriniak inspired helicopter swing? Raises my blood pressure just thinking about it.

Second base: Marty Barrett. The typical Red Sox second baseman hits in Fenway Park, particularly doubles, but nowhere else, and is then discarded and made a non-person by the organization. Barrett was the first in a line forgotten demi-gods that would also include Jody Reed, Jose Offerman, Todd Walker and Mark Bellhorn. There is a seat being saved for Dustin Pedroia in a few more years.

Shortstop: This means a good hit, no field guy, a player who can play shortstop only for the Red Sox. My vote is for Junior Stephens, who bumped Johnny Pesky to third base. Knocked in 159 runs in 1949 and let 159 ground balls through the hole.

Third Base: On style points alone, I’d like to vote for Boston’s own sex addict, Wade Boggs, but I can’t. The best and most important third baseman in Red Sox history is Hall of Famer Jimmie Collins, who changed the way the position as played, served as the teams’ first captain, and helped recruit most of the players that delivered Boston its first world championship in 1903. You can look it up, and most Sox fans should.

Left Field: This is too easy. Ted wins. Good hitter who hated the press, traits he passed on to Yaz and Rice.

Center Field: Dom DiMaggio. Because only in Boston will people still try to convince you that the bespectacled “Little Professor” was better than his brother Joe. But that’s because Bostonians always believe that “ours” is better than “theirs,” as in a “spuckie” versus a “gyro.” And if you have to Google “spuckie,” you’re from somewhere else and not from Boston at all, so take that NY crap outta here, pal...

Right Field: Yeah, I’ll go with Trot Nixon here. Over-rated every second he was in Boston, Nixon nonetheless managed to parlay bad hat hygiene and the utter inability to hit lefties into a ten year career as Boston’s right fielder, during which time he took home, but did not earn, almost thirty million dollars. Think of that. But if he was so good, how com no one misses him? Answer: Because he could not play.

Designated Hitter: A year ago I would have voted for David Ortiz, but now I think he’s as dirty as A-rod or Manny. In which case he fits right in, because most Boston DH’s have been vast disappointments and nothing was more disappointing than learning that Big Papi, like everything else in baseball over the last twenty years, is really a Big Fraud. So on second thought, it's Ortiz after all.

Roger Clemens, but only in his “Possessed Rebel” stage.

Pedro Martinez, the last man in the majors who had his own personal dwarf as a good luck charm. At the turn of the century, this was quite common. Really.

Oil Can Boyd. LOVE the Can. Only Sox pitcher ever honored by the National Geographic Society after his discovery of the ocean off the coast of Cleveland.

Cy Young. Neither a diva not a character, Young once said “Pitchers, like Poets, are born and not made.” My kind of guy. And with Young on the staff, who won 511 games and usually started about 45 games a year, you don’t need a fifth starter.


Relief Pitcher: I have to go with a personal favorite here. Remember Steve Crawford? Pitched from the pen for the Sox in 1986 and 1987. How good was he? Well in 1997 I faced Steve Crawford – who is the same age as I am – at a Red Sox fantasy camp and lined a single to right center. When you give up a hit to a sports writer… well, that makes you the quintessential Red Sox reliever!

Manager: Jimy Williams is the only candidate here, because the typical Red Sox manager has been an inscrutable child of the south who made decisions after consulting either the kabbalah, chicken innards, or, like Joe McCarthy before the 1948 playoff game, a bottle of White Horse scotch. I’m not quite sure what Williams used, but whenever I hear the phrase “manager’s decision” today, I go into spasms and have to take my pills.

PS: The picture shows my brother, seated, with the 2004 Championship trophy, something that meant less to him than anyone else in all New England, becasue he could not care less about baseball, which is one of the many things I like about the guy.
Posted by Glenn Stout at Sunday, March 28, 2010 1 comment:

Advice for a Young Writer

One of the greatest challenges a young writer will ever face is continuing to write without the forced deadline of a school assignment or a job. It is a test that will determine whether you are meant for this or something else. To start, writing for money is probably the last thing you should be thinking about - no one coming out of college is best served by waiting for a writing job to write. And if you do get one, it may be covering select board meetings and/or the paper towel industry. That is fine and well, but just a start.

Becoming a writer is a decision and a practice, not a job. Whatever work you do can feed your decision, for the practice of one task can inform another. Seek out others interested in words so there is a running conversation about writing taking place in your life. At the same time you should be thinking about stories and embarking on reading that school has not supplied - at its best, formal education prepares you to abandon formal education and start learning on your own - now is the time to start. Look at that as an assignment in itself - report, for yourself, on the paths over writers have taken. Trace those paths through reading. Read what the writers you like most have read. When you find yourself interested in any kind of topic, write it, when you think of an idea, write it, when you think of a phrase, write it, hear some dialogue, write it. Carry a notebook with you at all times. Get into the habit - write anything, notes, sketches, descriptions, etc. You need to write until you don't think about writing when you are writing. Study how stories are framed. Share work with friends. Try everything, all genres. Read everything. It all adds up, and you will never be more prepared to sink in neck deep in words than right now. If you put that off you will find it very difficult to return.

It was six years after college before I published a word. The only reason I did or could was that in the interim I kept reading and writing, steeped myself in it, and kept that - not just "a job" - the priority.

It wasn't practical, but nothing about this or any of the arts is. To paraphrase someone wiser than myself, being professional is doing what you should be doing when no one is watching.
Posted by Glenn Stout at Friday, March 12, 2010 No comments: