(This column first appeared in the July edition of Boston Baseball)


My older brother wasn’t much of a ballplayer, which I guess is really a nice way of saying he really didn’t like baseball at all. It’s understandable - he was left-handed and for some reason grew up trying to throw and bat right-handed. I was not much older than a toddler and remember watching him in Mosquito League wearing the old wrap-around earmuff batting helmets. When he didn’t want to play the next season, my parents, who weren’t big fans, were fine with that. Besides, somewhat inexplicably, by then I was crazy about the game and sucked up all the baseball oxygen in the house.


Yet he’s always recognized my baseball obsession, something I’ve grown to appreciate. He spent his career as a graphic artist and if something interesting and baseball-related passed his way, he always made sure I heard about it.


Since retirement he’s kept himself busy diving into the rabbit hole of our family genealogy so deeply that, well, if he’d have put that effort into baseball, he’d be in the Hall of Fame – I tell him he should become a professional genealogist. He gets lost in history and that’s where we intersect. When we talk, most of the conversations are about some arcane relative he’s just discovered which opens up some obscure fact about what was happening elsewhere in the world four or five hundred years ago.


Over the years he’s had some surprising finds, such as the fact that my high school band director, who I didn’t much care for and who I don’t think thought much of me, was something like my third cousin.  And he’s discovered other remote ancestral connections to people as diverse as Maria Shriver, the actor George C. Scott, Chicago’s Mrs. Catherine O’Leary (whose cow was blamed for starting the great Chicago fire), one of murderer Whitey Bulger’s victims, a turn-of the century congressman, and two former major league ballplayers. Clyde Shoun, winner of 73 games (including a no-hitter) as a pitcher with the Cubs, Cards, Reds, Braves and White Sox from 1937 to 1949, is a not too distant cousin. Through marriage I’m also related to Denny Galehouse, notable in Red Sox history for pitching, and losing, that 1948 playoff game to the Cleveland Indians. In 1988, long before I knew this, I interviewed Galehouse and was surprised when he told me I was the first writer to interview him about that game in forty years.


A few weeks ago my brother came up with the mother lode.  He identified my 8th great grandparents as Johan Peter Wagner, (1677-1742), and Eva Marie Heinz, (1677-1751), from the town of Dirmingen, in the Saarland, southwestern Germany. They had several children and daughter Ana’s lineage, after an immigration to the U.S. in 1837, leads directly down to my father, and hence to my brother and I.


He generally cross checks with other genealogies, and was surprised when he came across another very thorough and apparently accurate genealogy that included the same two names. Turns out they also had a son, John Valentin Wagner.


Here’s where it gets interesting. In 1866 his direct descendent, Johannes Peter Wagner (1838 –1913), also immigrated to U.S. His son, also named Johannes Peter Wagner, was born in 1874 in the borough of Chartiers, in what is now Carnegie, Pennsylvania. According to genealogists, that makes Johannes my 5th cousin, four times removed, sharing a tiny shred of the same DNA. 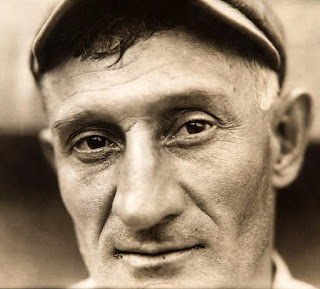 But you don’t know him as Johannes.  If you know any baseball history you know him as “Honus” Wagner, the shortstop for the NL Louisville Colonels from 1897-1899 and the Pittsburgh Pirates from 1900-1917. He figures prominently into Red Sox history because in 1903, the Sox and Pirates played in the first World Series, Boston winning in eight games when Nuf Ced McGreevey’s Royal Rooters (who I’ve written about at length) famously re-wrote the words to the song “Tessie,” mocking cousin Honus and his teammates without mercy.


Wagner recovered from the lass to win a total of eight batting titles and become a charter member of the National Baseball Hall of Fame, one of the first five men selected in 1936. He is considered the game’s greatest shortstop and his 1909-11 T206 baseball card is the most valuable card of all time. In 2016 one sold for $3.12 million dollars.


Apart from that twisted little strand of deoxyribonucleic acid and an outsized love of the game, I’m afraid that’s all I share with my esteemed cousin. While I must have inherited whatever remained of the baseball gene in the family, the closest I got to Cooperstown was a few visits to the Hall and an afternoon playing at Doubleday Field with my old over-30 team. Maybe I should have batted with my hands apart, like cousin Honus, and earned my way inside.


But if anyone wants to leave me a T206 Honus Wagner baseball card, I promise I’ll keep it in the family.

Glenn Stout recently assisted Red Sox groundskeeper David Mellor with his memoir One Base at a Time: How I Survived PTSD and Found My Field of Dreams.
Posted by Glenn Stout at Tuesday, August 06, 2019 No comments: